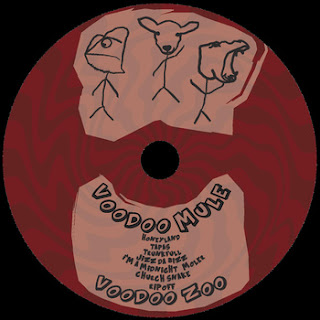 "A hybrid with an error, a not so clever idea gone worse, a menace that bucks you off with a hint of voodoo from under a tophat black... With a hint of sugar, spice and everything nice, that is how this sonic behemoth came about.
The idea behind Voodoo Mule was a simple one, no indie, just loud and filthy. These are the secret ingredients that bond together an ansable of three with Hippopotamus on drums, Iguana on bass, and Jagnje on guitar and vocals.
This is the form in which we`ve been working since March 2010 and performing since February 2011. We made our first recordings in February 2011 when we imortalized our first three songs that formed our first officialy unofficial demo that blogers labeled it to be stoner rock. Since then we have covered our homeland Slovenia throuout and our hometown Ljubljana several times as well, with disturbingly loud riff driven rock shows. Just cuple of highlighted shows were at Festival Lent, Paranoid Piknik Open Air, Metal Mania Open Air and supporting bands like Count Raven, Karma To Burn, Pagan Altar, Jucifer, Suuns, Rozbub and many many many more.
Our plans for the future are as simple as the basic idea that holds us together, play loud, play out, stay filthy and respect your roots."