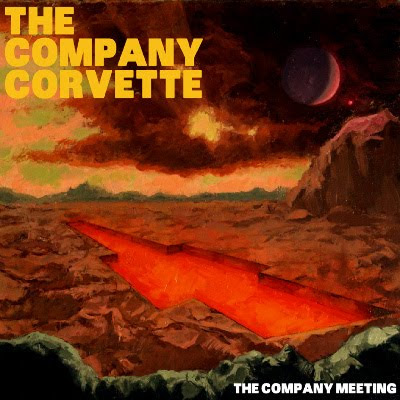 The Company Corvette from Philly are stuck in the past, I mean really! Is that bad, no of course not but this album is so chock full of 70's riffs, 70's Proto Metal sections and Bluesy sections, it is really like a time - machine taking you back to a time when music was honest and simple. First track "Butter Woman" kicks things off with a Motorhead meets ZZ Top vibe, the main riff has a swaggering groove and when the vocals kick in with its lay-back almost T-Rex sound, you know you are in for a fun ride. "End It" and "Hole" keep the grooves going with the band's exceptional guitar work from Alexei who is no slouch at a ripping solo either. The rhythm section of "Ross(bass and vocals) and Peter (Drums) are solid but without taking any of the limelight away from the guitar work which is the main focus of the songs. The title track "The Company Meeting" is Classic Blues Rock done with a slight modern Stoner Rock edge, a great tune and the riff change just before the 2 minute mark rocks. I wish they had of kept that going a little longer, this is pure catchy Rock N Roll. This track features another killer solo,nothing original about it but the execution of the songs is well played. "Party" doesn't do it for me however, a bit short and simplistic but they regain my attention with "Old New" which is one of the more stomping tracks on the album. Track 7 is called "22" and for the first time on the album you hear a little Doom riff but that doesn't last for long before they switch gears and move back in the Bluesy Hard Rock style. The last two tracks "Trouble" and "Dirty" are more of the same, just good old Hard Rock sounds. If 70's Rock still raises the hairs on the back of your neck or if you are looking for a good party record, you should like most of this album from The Company Corvette. Its worth the price of admission just for the amount of groove in the guitar work, if there is a weak point its the vocals. Not that its bad but it just lacks a bit of power and variety. He sings nearly everything in the same tone and pitch, I think if he added a bit more range to his voice the songs would gain would benefit a lot from the added dynamics. For fans of ZZ Top, Thin Lizzy, Motorhead and Queens Of The Stone Age, while I think this band can still improve a lot, this is a pretty good starting point. 7.5/10
From here

Link sent by the band. Thanks a lot for the email, Ross. Sorry for the delay in posting it!
Por DandS a las 8:30