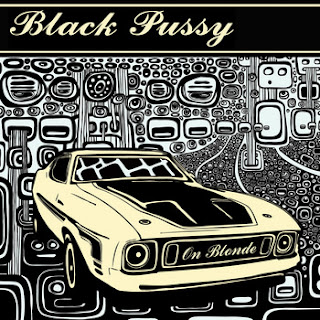 If Hendrix had lived, he probably would have ended up recording Black Pussy’s On Blonde in 1971 as a kerosine-soaked hard rock warning against the commercial, pretentious pop overkill to come. Black Pussy is the sound of a dirty, immense engine coming down a two-lane blacktop; a trip fueled by the roar of a 1967-purchased bong in the back of a 1972 Nova (“Marijuana”), listening to the cars surrounding, heading into the sunset (“Indiana”).

On Blonde was written and recorded by Dustin Hill, it’s his baby. He’s usually in White Orange with Adam Pike (who guests here), and rocks Black Pussy with bassist Pike, guitarist Ryan McIntire, and guitarist Peter Meissner (the latter also did the mind-blowing pop art album artwork). Wild and furious White Orange drummer Dean Carroll is drumming for Black Pussy when they play out live as well.

Black Pussy’s distinctive tag? “The Rolling Stones song ‘Brown Sugar,’” he says. “We heard a rumor that they wanted to call it ‘Black Pussy’ but for some reason or another they had to bring it down.”
FB / BC
Por KARLAM a las 0:00