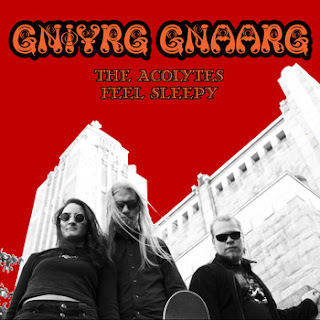 Gniyrg Gnaarg is a three-piece stoner/doom band from Helsinki, Finland. Born in 2009, we have released two demos; "From Mother Sun" (2010) and "The Acolytes Feel Sleepy" (2012) and played a handful of gigs in and around Helsinki.

Our music is a combination of Sleep and Black Sabbath influenced stoner rock and doom metal, with added hints of grunge, post rock, psychedelic rock, 80s metal and gothic metal stemming from each member's personal music tastes, melted together and refined by improvised jamming.

"The Acolytes Feel Sleepy" is our second demo, recorded at Crypt Studio, Helsinki, in April 2012. The first track, "Holothurian", is heavily influenced by ancient Japanese haikus about Holothurians (a.k.a. sea slugs), and is about an ancient chaos monk who tries to warn his nonchalant acolytes about imminent doom. "A Wizard?" is a short instrumental that works as an intro to the third track "Nay, a Prophet!", that tells the story about a prophet who has a vision of the depressing future of the world, but manages to see the bright side of it all in the end.